Proving that he still has what it takes to undergo the ultimate test of endurance, Tom Payet managed to get the better of his rivals to claim back-to-back wins in Saturday night’s annual Keenquip 50 Lapper at Collie Speedway.

It was certainly not an easy victory for the current and three-time WA Champion, who was embroiled in a fierce battle with Kyle Beard for much of the 50-lap distance, before seizing the lead with 10 laps remaining and going on to successfully defend the 50 Lapper crown.

Unfortunately for Beard, lap 38 saw him retire to the infield after battling with Payet for position, allowing two-time Australian Champion Daniel Hartigan to take over second place, after powering forward from near the back of the pack. Completing the podium in third was Brad Fitzgerald, followed by remaining finishers Brad Taylor, Adrian La Macchia, Brendon Wedge, Justin Wragg, Russell Seery, Melissa Hartigan and Geoff Leeson. 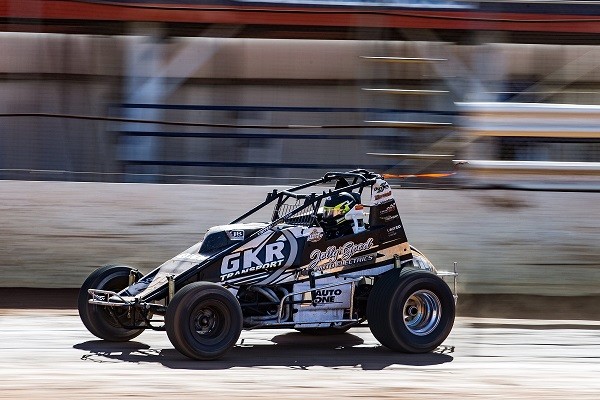 The 50 Lapper was without a doubt a race of attrition, with a number of drivers joining Beard on the infield, including Kyle Cutts, Darren Humfrey, Ashley Pittard, Kahn Cutts, Blair Goodall and Troy Tomlinson.

It was a disappointing result for Matty Fellowes, who rode a bump off the starting line, catapulting him into the fence and putting him out of 50-Lapper contention. Thankfully he emerged unharmed.

Following a number of incidents in his opening heat race, where he plunged him into the fence after riding another competitor’s wheel, causing him to lose his front end, as well as coming together with the pit gate and wall while trying to make a passing move on Katelyn Wright, former WA Champion Dean Gittos sustained extensive damage to his car and was unable to start the feature race, along with Warren Hunter and Wright.

Earlier in the night, Cutts, Wedge, Payet and Beard each came away with a heat-race win, while Payet dominated the Pole Knockout, managing to overthrow Wedge, Cutts, Fitzgerald and Beard to secure his pole starting position.

For their final outing for the 2016-17 season, Wingless Sprints WA will hit the track for this Friday night’s Fast Series at the Perth Motorplex.

Wingless Sprints WA would like thanks the major naming-right’s sponsor of the event, Keenquip, which is a Maddington-based business owned by Paul Keen, who has had extensive experience in speedway, having built and raced his own cars. Keenquip offer a wide range of racing apparel, equipment, spare parts, chassis and much more. To find out more about Keenquip, visit their website at www.keenquip.com.au.